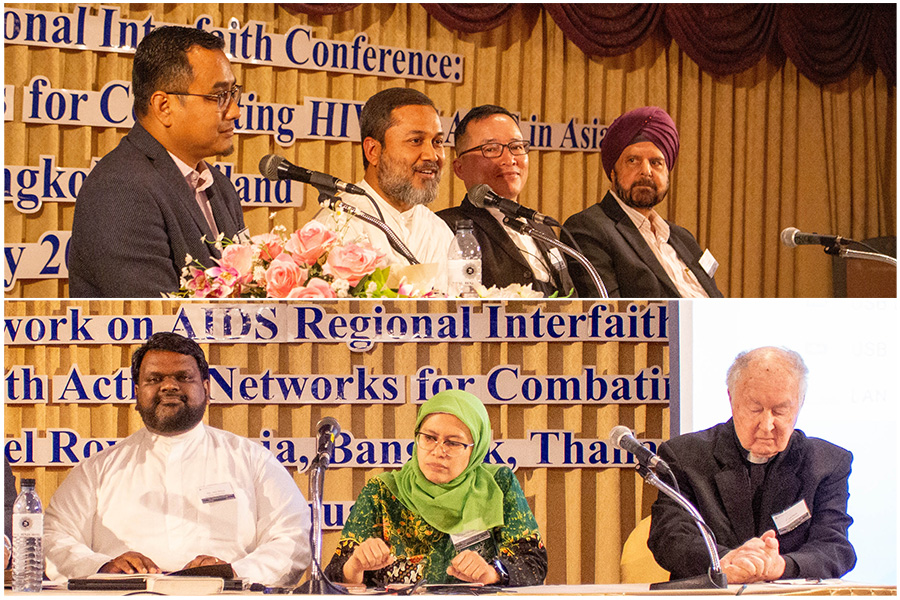 Bangkok, Thailand: A series of panel presentations delivered at the Asian Interfaith Network on AIDS Conference featured Christian, Islamic, Sikh, Buddhist, and Hindu perspectives on human dignity. The religious leaders who made the presentations affirmed concrete expressions of solidarity with people living with HIV and AIDS.

Dr Boonchuay Doojai, a renowned Buddhist scholar from the Mahachulalongkornrajavidyalaya University in Chiang Mai and chairperson of the Asian Interfaith Network on AIDS (AINA), spoke about Buddhist religious responses in addressing Thailand’s current HIV and AIDS situation. Thailand still needs to do more to reduce AIDS stigma, and the predominant religion of the Thai people, Buddhism, is trying to play an important role. He shared some positive initiatives, such as the existence of a network of monks serving people living with HIV and AIDS, as well as the establishment of the HIV and AIDS Temple, or Wat Phra Bat Nam Phu, in the mountains outside of Lop Buri, which is home to a large number of people living with the disease.

Rev. John Wilson, who heads Snehatheeram, a rehabilitation centre for people living with HIV and AIDS in Tamil Nadu belonging to the Malankara Mar Thoma Syrian Church in India, challenged Christian believers to engage with the fact that Jesus provides a space for people living with HIV and AIDS rather than acting as a barrier to healing. “Let our eyes become like Christ’s eyes so we can see people through their eyes,” Rev. Wilson said, “let our legs become like Christ as we walk towards those in need and see the people’s reality.”

Fr. Joseph ‘Joe’ Maier, a Redemptorist priest from the Roman Catholic Church who co-founded the Human Development Foundation (HDF) Mercy Centre which works for children living with HIV and AIDS in Bangkok’s slums, shared his conviction that “the church and all of us share the responsibility of caring for the poor and sick”. Working primarily with Buddhist communities in Thailand, Fr. Maier affirmed that “everyone is sacred according to the teachings of all religions, and this faith affirmation motivates all religions to be the advocates of combating HIV and AIDS in Asia”.

Speaking from the Hindu perspective, Swami Atmananda, a member of The Art of Living Foundation, elaborated on the phrase ‘the whole world is one family’ which encapsulates the entire mission of the Hindu teaching of upholding the value of human dignity. The holistic approach to healing by using meditation, Swami Atmananda believes, is critical for achieving a healthy mind and a broader perspective on life; even for those living with HIV and AIDS who face low self-esteem, a lack of self-respect, and the need for a change in mindset.

Dr Citra Fitri, a mental health specialist at YASRl Hospital in Indonesia and the secretary of the Health Department of the Nahdlatul Ulama (NU), Indonesia’s largest Islamic organisation, shared the Islamic perspective. She talked about NU’s HIV prevention work which began in 2010 and affirmed that advocacy for HIV and AIDS must be considered a pathway for acknowledging every person’s dignity.

Frank Sethi, a Sikh Gurudwara leader in Chiang Mai, Thailand, spoke about the Sikh religious faith perspective on dealing with HIV and AIDS, which requires people to cherish one another by caring and sharing to address society’s, and the world’s, sufferings and difficulties.

The three-day Asian Interfaith Network on AIDS Conference themed ‘Towards Strengthening Interfaith Action Networks for Combating HIV and AIDS in Asia’ underscores the importance of interfaith collaborations within communities for creating a harmonious environment that will foster human dignity, inclusivity, and acceptance, thereby overcoming the major barrier of stigma against people living with HIV and AIDS in a diverse multifaith Asian context.